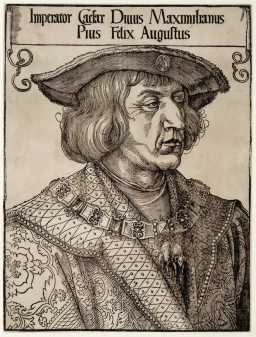 In the summer of 1518 a Diet (council) was held in Augsburg to iron out some political problems. The Papal States and Holy Roman Empire were warring with the Republic of Venice, Constantinople had fallen to the Turks a half century earlier, and now they were trying to move into Greece and the Near Middle East. An imperial tax (the crusade penny) was levied on the German states to pay for defense of this threat from the East. In August, Holy Roman Emperor Maximillian signed a truce in Augsburg to end his conflict with Venice and free him to lead a crusade against the Turks with support of Pope Leo X, who sent envoys to Germany to assure the tax got paid. To sweeten the pot, the pope arranged for Albrecht, Archbishop of Mainz, to become a cardinal, and the emperor was honored with the consecrated hat and sword (symbol of a crusader.) But instead of being grateful for these honors, the Germans let it be known they were tired of sending money to Rome. As Frederick the Wise, Elector of Saxony, was at the forefront of this faction as well as being Luther’s patron, the papal legate (Cardinal Cajetan) was sent to Germany, but told to tread lightly.

Luther had an interrogation under Cajetan from 12 -14 October in Augsburg. Cajetan had three demands: Luther should return to the heart of the church, retract his errors, and refrain from anything that would disturb the church. Luther thought he was going to have a real debate, but Cajetan brought up only two issues: Through treasures of the church the pope could remit temporal punishments for sins, and the certainty of justification could never be ascertained. Of course, as the leading Thomist of his day, he quoted Thomas Aquinas, and Luther would not respect his scholastic viewpoint. Luther insisted scripture had to prove him in the wrong, and that was something Cajetan was not prepared to do. As Luther would not recant, Cajetan concluded that as Luther was unwilling to bow to the church, he was certainly a heretic. He urged Frederick to send Luther to Rome and not let the little friar bring ignominy to him. Cajetan could not understand how this ludicrous monk could be allowed to continue his drivel and why Frederick protected him. Cajetan also did not understand that the German princes felt themselves responsible not only for the political well being of their subjects, but also for the religion of regional churches. They considered themselves to be Christian rulers. That Frederick’s religious convictions would not allow him to compromise helped Luther repeatedly.

As Luther continued his Biblical studies into 1519, he came to the conclusion that Christ was higher than the pope, and distinguished between the Roman curia which had to be resisted, and the Roman church which he still considered the bride of Christ. Luther saw that the actual life of the believer was a process, still mired in sin but reaching out for righteousness. Love of neighbor flows from the cross, and all Christians are equal. He introduced the concept of the priesthood of all believers. The hierarchy of the church invented the laws by which they ruled, and were heralds of the antichrist. The church’s mission was proclamation of the Word, not just administration of justice and liturgical celebrations. It was only human traditions that dictated that marriage was prohibited to clergy, and because of that souls were being destroyed every day.

In January 1519 Emperor Maximillian died and was succeeded by his 21-year old grandson, Charles V, elected as king of Germany in June, and Holy Roman Emperor in October. (As an aside, about this same time, Cortes was destroying the Aztec empire, and Magellan circumnavigated the globe.)

June 15, Luther wrote Address to the Christian Nobility of the German Nation, in the German vernacular, which was a call to the church to reform. In it he begins with attacks on the pope. He stated that the pope will never agree to reform in the church because he believes: 1. Spiritual authority is above worldly authority, 2. The pope alone is the interpreter of scripture, and 3. Only the Pope can summon a council to make decisions regarding the church. Luther submitted a 24-point program for reform: 12 were reforms in the papacy, and 12 were reforms to those who rule over the world and church concerns, such as the independence of German church and emperor, clerical exploitation, church and secular lives (e.g., monasteries, clergy, indulgences, masses for the dead, saint’s feasts, schools, charity, care of the poor, etc.) 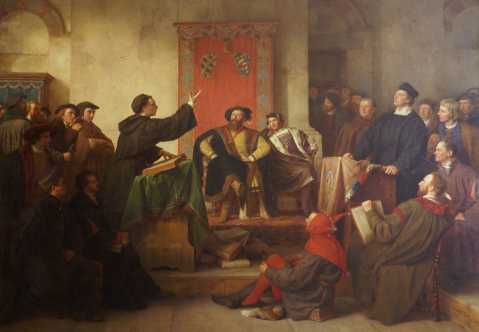 From June 27 to July 16, Carlstadt and Luther had a debate in Leipzig with Eck over Luther’s 95 Theses . Both sides declared they did not intend to deviate from catholic doctrine in any way, Luther adding that he was being forced against his will to discuss the topic of the papacy. The debate was Carlstadt vs Eck, Luther vs Eck, and again Carlstadt vs Eck. All that came out of this debate was that no one was declared winner. In the debate Eck attempted to prove that the pope was the ruler of the church, and Luther said Christ was. Eck quoted the church fathers, and Luther said they are subordinate to the scriptures. Eck brought up Huss and Wycliffe statements against the divine right of the Roman primacy, Luther stated that the [Easterrn] Orthodox Church was independent of Roman primacy and not considered schismatic. Luther also stated that not everything Huss objected to was heresy, in fact in some points were Christian and evangelical. Eck called Luther a Bohemian and heretic. Luther said one didn’t have to believe in the supremacy of the pope for salvation. Eck said the Roman primacy was backed up by the Council of Constance. Luther said councils can err, Eck said they cannot and never have erred. Luther disagreed. And so it went…

In February 1520, Luther had a shattering finding. A famous document used to prove the transfer of sovereignty of western Christendom from Emperor Constantine to the pope in the 4th century was discovered to be a fraud. The Donation of Constantine, Rome’s claim to supremacy, was nothing but Roman trickery. Luther concluded that the Antichrist, expected to appear in the Last Days, had begun his attack on the church.

Luther also wrote two other important treatises in 1520. The Babylonian Captivity of the Church, written in Latin for academics, dealt with church laws and the sacraments. He stated only those sacraments Christ instituted are valid (i.e. baptism and communion, and maybe penance) and the rest were only church customs. In On the Freedom of a Christian, Luther offers an understanding of justification , based on 1st Corinthians 9:19. Luther stated: “A Christian is a perfectly free lord of all, subject to no one.” And in faith, “…a Christian is a perfectly dutiful servant of all, subject to all.” It is the faith of the inner man that makes one free, and by which the outer man may serve others. 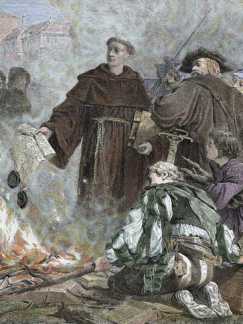 In June 1520, a papal bull threatening excommunication of Luther was issued. He had 60 days to recant. Luther did not receive it until October. Rather than recant, in December with his friend Melanchthon and university students he burned not only the papal bull, but also the books of canon (Roman church) law. He was excommunicated in January 1521, and summoned to appear at Emperor Charles V’s first German Reichstag (Diet) in Worms in April. As a Spanish Hapsburg the very Catholic Charles V made it clear what was at stake here. He had his own personal confession of traditional Catholic faith read aloud in German, gave Luther safe conduct, and stated he wanted no delays in dealing with this notorious German heretic.

Luther went to Worms assuming he was being called to debate and defend his 95 Theses and other writings. What he got was a pile of his writings, and asked if he had written them. He acknowledged he had. He was then asked if he recanted what he had written, and he stated that with such a lot of writings it was possible there could be some errors here or there and he asked for time to review each one. Charles V gave him one day to review them. The next day he was again asked to recant. And he gave his famous response:

Unless I am convinced by the testimony of the Scriptures or by clear reason (for I do not trust either in the pope or councils alone, since it is well known that they have often erred and contradicted themselves), I am bound by the Scriptures I have quoted and my conscience is captive to the Word of God. I cannot and I will not retract anything, since it is neither safe nor right to go against conscience. I cannot do otherwise, here I stand, may God help me. Amen.

In May Emperor Charles V issued the Edict of Worms, the imperial ban making Luther and anyone who helped him an outlaw. Luther’s books were banned, and all written materials were to have church censorship.   At this point anyone was free to kill Luther outside of Prince Frederick’s protection in Wittenburg.