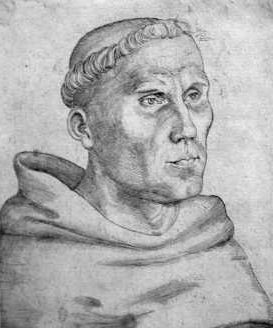 Luther is often pictured as an angry young man, striding through town to forcefully hammer his writings on the Wittenburg church door, to denounce the pope and indulgences so he could start a revolution against the Roman Catholic Church. Nothing could be further from the truth. Picturing Luther as a thoughtful, pious young monk, who was posting questions on the church door (the town bulletin board) in Latin (which most could not read) asking other scholars (not the public) to come or write to discuss not only indulgences, but also church issues such as penance, contrition, confession, and true repentance. He was very concerned over the souls of his flock who believed that with their letter of indulgence, they didn’t have to even go to confession anymore since they had a ticket to heaven. Basically, he was a man concerned with the salvation of his soul and that of others as well, unsure if one could know if he repented enough, and if the pope could really intercede and bestow God’s grace on the dead and release them from purgatory. He had too many questions and doubts and not enough answers. He hoped that discussion with other scholars might help him see things more clearly and help him discover truth. This was the point of disputations at that time. He firmly believed that the church held the keys to salvation, and that the pope was to be obeyed as Christ’s representative on earth. Reforming the church? Not even a thought.

Before writing the 95 theses, Luther had preached and written on abuses of indulgences, and was concerned that indulgences were sold to release souls from purgatory, but requiring no true repentance and contrition. Luther felt that one needed to acknowledge his sinfulness, be disgusted with himself, and turn to a life of constant repentance, seeking God’s grace continuously. An indulgence was only valid after true contrition, but since perfect contrition supposedly already removed punishment, why would an indulgence be needed? And an indulgence was only valid for an actual sin, but what about man’s natural disposition toward sin – original sin? These are the kinds of questions found in the theses. 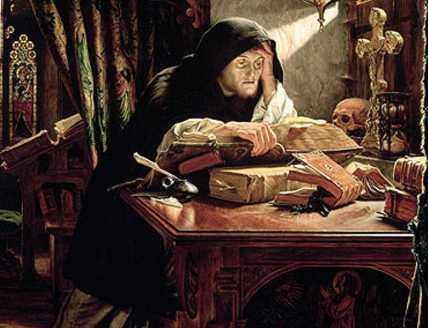 First of all, although we celebrate the posting of the theses as October 31, 1517, they really were posted in mid November. However, we can still celebrate the Reformation on the 31st, as this is when Luther sent a letter to Albrecht, Archbishop of Mainz. The tone of the letter was that of a devout son, full of humility toward a prince of the church, and (pretending?) that he felt sure Albrecht didn’t know what was being done in his territory and in his name. He tells him indulgences are being sold that supposedly redeemed one from every sin, even if he had “raped the Mother of God.” Not only was the sin forgiven, but also the guilt. He tells Albrecht that he (Luther) knows nothing about the certainty of salvation, but surely piety and good works are better than indulgences, and he reminds Albrecht that Christ never preached indulgences. Luther tells Albrecht he is afraid that if he doesn’t stop the indulgence trade, someone may come along later and bring shame to him for it. He closes his letter with a plea that he is only doing his duty as one called to be a doctor of theology, and he attaches his 95 Theses. No word is said against the pope or the scholastics supporting indulgences. Luther also sent letters to other bishops at this same time: The result of which was a total of zero response.

As to the indulgences themselves, I will give my brief summary of some of the points.

For a little while nothing happened except several people told Luther he should be careful. Luther told his friends Spalatin and Karlstad that he now thinks indulgences are a deception of souls. His theses were printed in Nuremberg, Leipzig and Basel in December 1517, then translated into German and sent everywhere, thanks to the invention of the printing press. After a delay, Archbishop Albrecht of Mainz got Luther’s letter the end of November, and sent a copy to Rome. And the rest is Reformation history.