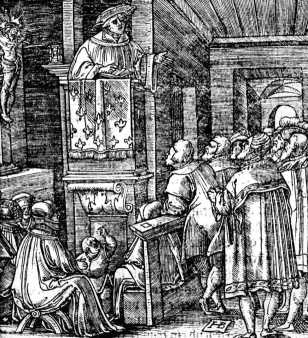 After receiving his Doctorate in Theology, Luther plunged into lecturing on the Bible, beginning with the Psalms, Romans and Hebrews and he tells us this was no easy task. He stated that he was not a person who could suddenly out of nowhere be able to understand scripture. First of all, one had to have life experience. He spent a great deal of time reading and meditating on the Bible, praying the Divine Offices, and keeping vigils to the limit of his physical ability.   Then he began studying Augustine, and seeing the great gulf between the early church fathers and Aristotle. In Augustine he saw that philosophy can never grasp the true nature of man – that he is God’s creature, and no matter how noble man’s thinking is, it cannot fathom salvation. Questions of faith have to be found in scripture or not at all. And as much as he loved the neo-Platonist Augustine, especially his expositions on St. Paul, he could neither look to him for infallibility, nor gain salvation by substituting Augustine for Aristotle.

He began studying Hebrew to get closer to the original scripture, and concluded that the main obstacle to understanding it was man’s resistance to the Word of God which shows we are all sinners.   By 1513 Luther stated we must make repentance a way of life, and at the end God the holy judge will mete out reward or punishment. At this time he thought the righteousness of God meant his wrath, and he hated Paul when he talked about the righteousness of God. All we could do was work as hard as we could, all the while fearing death and God’s judgment. We must approach God in complete self-abasement with our guilt, completely dependent on God’s mercy. We could hope for salvation, but never be sure of doing enough to win God’s favor.  This was the basis of Luther’s theology of humility. In spite of this gloomy prognosis, it is Christ who judges, humbles one, and then becomes man’s mediator with God. 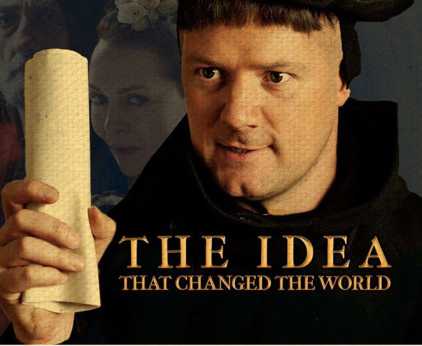 By 1516 through his lectures on Romans, he brings Christ more to the foreground. He now posits that believers are both righteous and sinners simultaneously, and salvation comes to us from the outside. It is God who gives forgiveness and faith. God does everything. We only receive. Man accomplishes nothing by trying to gain salvation by his actions. These thoughts are the beginning of Luther’s theology of the cross.

Luther’s early lectures were not only about theology, but also were aimed at educating the whole person and the relationship to the church and its sacraments. Luther discussed the abuses going on in the church, and how clerics were making Christianity a laughing stock. Instead of shepherding their sheep, the church was fleecing them. Even so, he believed in obeying church authority which he felt was instituted by God. Later, Luther’s views on obeying authority carried over into the political arena.

At this time we need to delve into some of the political actions and important (and self-important) people of the time.   The first pope we mention was Pope Julius II, who in 1507 first offered an indulgence for the rebuilding of St. Peter’s church in Rome. Originally an indulgence was a means by which one could do acts of penance to gain merits. The merits could then be applied against time to be spent in physical punishment in purgatory. The theory was that saints, and especially Christ, had earned merits by their acts of kindness or sacrifice when living on earth. The pope had a treasury of these merits which he could dispense to whomever he wished, after that person confessed any sin, was contrite, and did penance for that sin. The reality was that the pope needed money to rebuild St. Peter’s, and one way to get it was to sell these indulgences to whoever had the right amount of money. Although the person receiving the indulgence was to confess any sins, do acts of contrition, etc., priests were increasingly overlooking those parts. The selling of indulgences was continued under the next pope, Leo X (the pope who excommunicated Luther.) He wanted money and more money, so was quite happy with taking money from the poor to line his pockets and pay for St. Peter’s reconstruction and art work. And the money rolled in.

Pope Leo X was getting richer not only through sales of indulgences, but also through sales of clerical offices. One of these offices was bought by Albrecht of Brandenburg, Archbishop of Magdeburg, who borrowed a ton of money to pay the pope for the even more powerful position of Archbishop of Mainz, the largest archdiocese in Christendom at the time. Albrecht had become a canon at age 14, although 16 was the minimal age. On becoming archbishop at 24, he was still too young to assume episcopal office, but for a fee one could always get a papal dispensation and Albrecht did. He was incapable of preaching and knew nothing of theology, but he could carry out church rituals, and money spoke the pope’s language.

In order to pay off his huge debt, Albrecht got permission from (you guessed it) the pope to sell indulgences throughout his archbishopric lands. Albrecht got half the money raised by selling these worthless papers to the poor who were told all their sins were remitted and when they died they would go straight to heaven. One could also apply an indulgence for someone already in purgatory. (Who wouldn’t want to get dear old granny released from suffering?) It was said the pope himself would intercede for these souls. 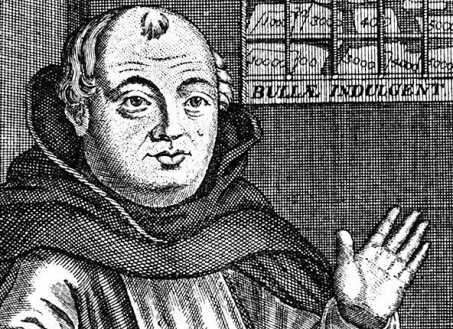 To do the selling, in January 1517 Albrecht hired the early version of a snake-oil salesman named John Tetzel, who arrived in towns with a great deal of fanfare, set up his business in the town square with the jingle, “As soon as the coin in the coffer rings, the soul from purgatory springs.” (Interestingly, Tetzel had a doctorate theology, had been a preacher in Leipzig, and an inquisitor of “heretics” in Poland.) He was great at wringing pity out of simple folk urging them to have mercy on their loved ones and save them from the tortures of purgatory. They were even given certificates (which most couldn’t read) proving they had the indulgence.  (One wonders who was to be shown these indulgence letters – their priests here on earth (to prove all their sins were forgiven and now they could sin with no penalty), Christ at Judgment Day, St. Peter at the pearly gates, or maybe Satan at the gates of hell?)

Luther saw through this slick trickery, but wondered if the Archbishop and Pope Leo X were entirely aware of what was going on. Surely they could not condone such trickery?  Frederick the Wise, the prince of Electoral Saxony, would not even allow Tetzel in his territory, so Tetzel set up near enough that people from Electoral Saxony could go to him for their letters of indulgence. Luther was confronted with poor people who had been sold a bill of no goods, and he had to tell them the indulgences were a useless waste of money.

It is imperative to understand that, at this time, Luther was not against the pope or indulgences per se. By example, both the Archbishop of Mainz and Frederick the Wise had large collections of relics (saints’ fingers, pieces of the “true cross,” etc.) to which people could make pilgrimages, pray and pay, and be granted an indulgence. The indulgence was given, however, only after one made a confession of sins, repented, and completed any required penance. What Luther was against were the abuses and outright lies about the efficacy of indulgences without proper preparation. He also saw that buying indulgences made people glad to escape punishment for their sins, but they were generally not contrite over them. He had already spoken about this in July 1516. He was also against collection of money through indulgences that was not used for the purposes intended, like building churches and giving to the poor, but rather to line the pockets of indulgence backers and sellers, and to pay for wars.

One other player needs to be mentioned here, and he is the Holy Roman Emperor.   The emperor was the ruler over what today would be most of Germany and other pockets of Central Europe. Up until 1519, it was Maximillian I. 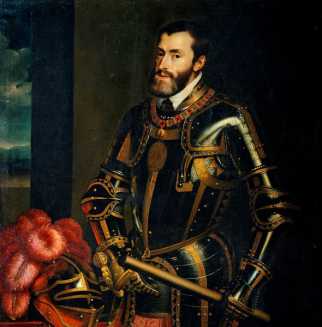 In 1520, Emperor Charles V became the new emperor chosen by 7 German electors, one of whom was Prince Frederick the Wise of Electoral Saxony (there was also Ducal Saxony.) Charles V was also King of Spain, parts of Italy and Netherlands, Burgundy (France), Austria, Croatia, Bohemia, lands in the New World, and a whole lot more. Needless to say, the emperor had a great deal of power, and at times he was directly involved with Luther and reformation activity. At other times he was too busy preparing for and fighting wars, primarily with France and the Ottoman Empire (Turkey). Although he gave up some territory in his wars, the Holy Roman Empire itself lasted until Napoleon ended it in 1806.