When Luther entered the monastery in 1505 as a novice, age 22, he was assigned the general cleaning tasks of a menial servant with little time to study. When the vicar general Johann von Staupitz heard of Luther’s great desire to study the Bible, he gave him a new task more in keeping with his Master of Arts Degree. 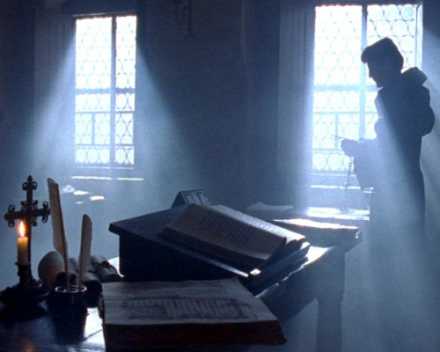 Luther was not the usual simple monk, and his new task was to memorize the Bible page by page. Luther worked so hard at trying to do so, that Staupitz was impressed and kept his eye on him from then on. Luther now had a new paternal friend who would help him with academic and spiritual counsel, and also look out for Luther’s advancement in his vocation. As Luther the priest was now to care for the souls of others, a commission which concerned him greatly, the nurture of his own soul by Staupitz was a very good thing.

In 1507 Luther was ordained as a priest and celebrated his first mass in Erfurt. During a part of the mass where he offered a prayer directly to God, he was literally so overcome with fear and trembling that he stumbled in his prayer and felt he could not continue. Only by pressure and reassurance from his prior was he able to continue the mass.   Later he would recount this episode of feeling so awed by the majesty of God as one of his fundamental religious experiences. At the time, however, he felt totally unclean, unworthy, and overwhelmed to dare to approach the holy God, and knew he had to strive for perfection to make himself worthy.

The majority of 1508/09 Luther was in Wittenberg, called by Staupitz to lecture on Aristotelian ethics, and he was told at that time to prepare for a Doctorate in Theology. He was not happy with this decision, but in obedience to his master he began this study along with his teaching duties. In the fall of 1509 Luther was recalled to Erfurt, where he lectured on Peter Lombard’s Sentences. This four-volume text was the first attempt at a systematic theology. Written around 1150, they contained texts from various sources (Scripture, St. Augustine, other Church Fathers, Aquinas, Ockham, etc.) and tried to find ways to reconcile their doctrinal differences. Many questions were left unanswered, allowing later scholars a playground for further study. He remained in Erfurt about l-1/2 years.

Meanwhile, Staupitz wanted to reunite the Conventual and Observant Augustinians (also called the Augustine Eremites or Hermits), and he wanted a decision within the Observant community as to whether they should strive for their own perfection by withdrawing from the world into enclaves of obedience to the order, or be a launching pad for the church mission to care for the salvation of others through preaching and ministering to lay people. He decided to make an appeal directly to Rome for guidance. As it turned out, Rome’s response forbid them from making appeals to Rome, and stated that the order should follow vicar general Staupitz’s rulings. Dispite this less than warm reply from the pope, there was some benefit from this exercise in futility.

In the winter of 1510/11, Luther and another monk were assigned to walk the 3 months to and from Rome to carry the appeal, and they spent a month in Rome. Luther was very excited about going to the holy city and doing acts of penance to gain indulgences to get his grandparents out of the punishments of purgatory. He even found himself semi-wishing his parents were dead so he could get them out of purgatory too. The problem was, as sayings of the time stated: “The closer to Rome, the worse the Christian,” and “If there is a Hell, then Rome is built on it.” 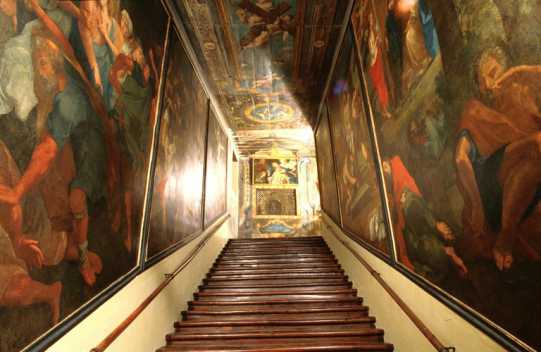 Nevertheless, Luther faithfully crawled up the Santa Scala stairs on his knees saying the Our Father on every step. When he got to the top though, he wondered if his actions really did anything, and if release from purgatory could be true. He viewed Rome as the city of the holy pope, church and martyrs, yet he heard blasphemies on every corner, and even in the mass the priests were saying all kinds of filthy things. (Ten years later, Ignatius of Loyola, founder of the Jesuit order was advised against going to Rome because of all the depravity there. Pope Hadrian (whose predecessor, Leo X, was the pope to excommunicate Luther) even sent his nuncio to Nuremberg to confess guilt for the offenses in Rome and stated: “The first thing that must be done is to reform the curia, the origin of all the evil.”) But that was later.   Luther was totally dismayed by what he saw and heard there. He still had faith in the church of his early years, and in the office of the pope, but he began to wonder whether the pope was really the vicar of Christ. And later when he was in the indulgence controversy, he came to see that the church was indeed trying to peddle God’s grace in Rome.

So Luther returned from Rome to Erfurt sadder but wiser. In the summer of 1511 he was recalled to Wittenberg, where in May 1512 Luther was appointed deputy to his prior and in charge of the studium generale where younger members of the order were given academic training. In October Luther at 29 received his doctorate in theology, and took over the chair of biblical theology from Staupitz. He held this position until his death. (It is interesting to note that although Luther heard Biblical passages in the masses he attended as a child, he stated he had never seen a complete Bible until he was 20!)

Luther returned from Rome a changed man. He began to rethink what he was taught in his university studies and what he learned as a monk. The brilliant scholastic thinkers were not scholarly enough for Luther when for him the Scripture was the only reliable standard of truth. He felt philosophical speculation about the world had to be tested against reason and experience. In essence, over time, Luther moved from scholasticism (metaphysics and intellectual ideas) and humanism (man at the center of everything through the study of classical linguistics and texts), and into nominalism (which appealed to solid proof and what we would now call scientific method.) This did not, however, bar Luther from using Aristotelian logic and dialectics in his disputations, or using Latin, and learning Greek and Hebrew in order to expand his skills in exegesis. And his understanding of the philosophical disciplines allowed him to be master, rather than slave, to any.

The following quote is from Heiko Oberman’s book, Luther – Man between God and the Devil:

From the critical perspective of his time Luther now joined the ranks of those stupid monks who endlessly argue about anything and nothing, who see themselves up as guardians of piety and proper doctrine, yet are unable to count their own toes. Learned theologians in his own country and ecclesiastical authorities in Rome at first dismissed the questions Luther raised as typical monkish bickering. There was as yet no way to predict that a man had appeared on the scene who was seeking the truth in the mazelike roads to salvation offered at the time.

It is crucial to realize that Luther became a reformer who was widely heard and understood by transforming the abstract question of a just God into an existential quest that concerned the whole human being, encompassing thought and action, soul and body, love and suffering. The search for salvation was not reserved for the intellect alone.

In September 1517, Luther at age 34, caused a big stir in academia with his Disputation against Scholastic Theology. All he did was call the universally required years of Aristotelian studies in all the universities a waste of time (my emphasis.) This was a shot heard around a large part of the academic world. The world of theology took a direct hit. And this was just the beginning.