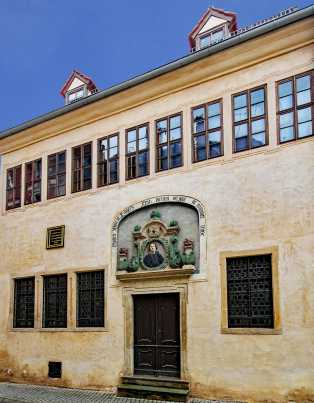 Martin Luther was born in the town of Eisleben, Germany, on November 10, l483 (or perhaps 1482 as neither he nor his mother were sure of the year). In 1484 his family moved to Mansfeld, which he thought of as his home. The Luther (then called “Luder”) grandparents, Heine and Margarete, lived in the little town of Moehra where they owned farms. The grandmother appears to have been a Ziegler, and the Ziegler family and the Luders, although only peasant farmers, were the most well-to-do in the village. These peasant farmers owned their own land, had a form of self-government, and enacted their own local laws. They cannot be equated to the serfs in other parts of Germany who were impoverished tenants constantly being exploited by their landlords.

Two of the peasant laws decreed that farmlands could not be divided, and that the youngest son was the inheritor of the land. As Luther’s father Hans was not the youngest, he left the area and was employed as a miner in the copper industry – first in Eisleben and then Mansfeld. He started out as a simple miner, but in short order was able to lease a copper pit, which made him a person of some stature. His occupation was subject to the fluctuations of copper needs, so their income was variable and they lived very frugally. Nevertheless it allowed them to send Luther to Latin schooling and university. At the University of Erfurt he paid his enrollment fees in full, and therefore was not seen as the son of poor peasants. Although at times deeply in debt, before his death, Hans Luder had paid off all debt and left a substantial sum for his family. There were probably nine children in the Luder family, but only one brother and three sisters reached adulthood. So Luther saw at first hand, peasant life, the mining life with its economic ups and downs, problems with running a business, the struggle to raise a family under harsh conditions, and how tenuous life was. These early lessons in life helped form who he was and gave him understanding when he was called upon to mediate in a variety of circumstances.

Luther’s father is generally given credit for much of Luther’s success, but perhaps his mother’s family deserves even more. Hans Luder’s marriage to Margaret Lindemann certainly had a large impact on Luther’s future endeavors. She did not come from a peasant background, but from an established burgher family in Eisenach. One of her cousins was a doctor of law and electoral councilor in Saxony, and his brother a doctor of medicine, becoming first the personal doctor of the elector, Frederick the Wise, and later professor of medicine in Wittenberg. Another Lindemann was a town council member 23 years and went on to be mayor of Eisenach. Education was a well-established tradition of the Lindemanns. Later when Luther was accused of being a Bohemian Hussite heretic, he stated his whole family was from Eisenach (which would have meant the Lindemann family) and he attended school there three years staying with Heinrich Schalbe, a friend of that family. Hans Luder’s rapid rise in the copper industry may have been because his connection to the Lindemanns could have helped him obtain loans.

Luther had a very strict upbringing and, as was common at the time, incorporated corporal punishment. He reported receiving a whipping from his mother which drew blood for stealing a walnut. At one time his father punished him so severely that he had trouble winning him back. Nevertheless, Luther states his parents had the right to punish him as they saw fit. Luther also stated later that next to God, everything “I am and have I owe to my father’s love.” He spoke with great respect about his parent’s marriage and considered it a divine establishment.

Excepting his year in Eisleben, Luther spent his childhood up to his 14th year in Mansfeld. At about the age of seven, Luther attended what was called a “trivial” school, which taught Latin grammar, some logic and rhetoric, and music. Studies were drilled into the students, frequently enforced by the rod. Luther stated he was beaten 15 times in a single morning because he couldn’t correctly conjugate a verb. He later said these schools were “hell and purgatory.” (Small wonder!) In addition to the instructors, a student “wolf” was appointed to keep a list on anyone who spoke German, swore, or misbehaved, and at the end of the week offenders were punished. A wooden jackass was hung around the neck of the worst offending child. Students had to attend mass where liturgy served as the teacher of Christian faith. There was no formal religious education. Because of this nightmare schooling, when Luther became a teacher he stated ordinances should limit punishment, and excessive punishment be forbidden. Education should be for the student, and any punishment should be balanced with kindliness.

In his 14th year Luther was sent to Magdeburg where he lived with the Brethren of the Common Life. 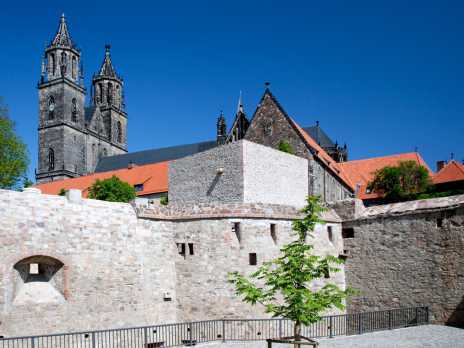 This was not a monastic order, but a community wanting to be poor without taking an actual vow. They did not believe in begging, but rather working for their sustenance, mainly by copying books and religious material. Here Luther was for the first time exposed to an intensively pious atmosphere. These kindly men could not have helped but make an impression on him as they were living their faith, not selling it on street corners as he later saw. Apparently, he went to the cathedral school, but nothing is known about what coursework he did there.

After a year he was sent to Eisenach and into the circle of relatives. He had aunts, uncles and cousins there and he felt at home. Luther later called the city “a nest of priests and an emporium of clergy,” but he loved it. He was accepted into the home of Heinrich Schalbe, a community leader and sometime mayor, where there was a collegium dedicated to the Franciscan monastery veneration of St. Elizabeth. Again he was with people who took religion seriously. Luther wanted to invite them to his first mass but refrained from doing so, because since he was an Augustinian they might be insulted.

While in Eisenach he had a good relationship with the priest Johannes Braun, vicar of the foundation of St. Mary. There was a group which gathered around Braun where they talked, sang songs, and exchanged books and correspondences. There Luther became acquainted with the new and fashionable veneration of St. Anne which had a new mass liturgy.   (St. Anne will show up again in Luther’s life.)

In Eisenach he attended the parish school of St. George. Nothing is known of what he studied there, but it surely included further Latin studies and was enough for him to succeed at university. Luther’s background is no longer that of a peasant. Because of his association with middle class city people and his schooling, he was now able to set his life in new directions.

For Hans Luder his dream of having a lawyer for a son now seemed to be moving towards fruition.